Up to 15 percent of French people said they have a positive attitude toward the Islamic State, formerly known as the Islamic State of Iraq and the Levant. The share of ISIS supporters is largest among France’s younger generation, a new poll says.

Twice as many French people expressed a positive reaction to Islamic State (IS) militants than in Britain, where the number of people favorably disposed to the IS stands at 7 percent, and Germany, where a meager 2 percent of the respondents sided with the IS, according to a poll carried out in July among 1,000 people aged over 15 years (over 18 in Britain) in each country. The poll was conducted by ICM Research for the Russian news agency Rossiya Segodnya.

…. In Britain, the only two-digit number of IS supporters – 11 percent – is to be found among people aged between 35 and 44, and in Germany among young people of 16 and 17 years old – 10 percent, the same poll found. No Germans between 55 and 64 years old back the IS and an overwhelming majority of German people in this age group denounce it. In Britain, the largest number of IS opponents – 70 percent – is to be found among seniors over 65. 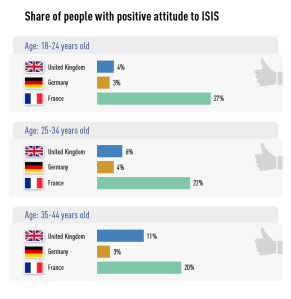 Among the three countries, France, whose population numbers 68 million people, has the largest Muslim community (7.5 percent), whereas the UK’s Muslim population is 5 percent and that of Germany is 4.6 percent, according to a Pew Research study published in January 2011.